Terror group responds to destruction of its tunnels into Israel in which eight terrorists were killed using Israeli breakthrough.

It’s Time for the United States to Grade the U.N. and Other International Organizations (full text)   (top)
…. Whether it’s the U.N. or other global institutions, the United States should regularly assess international organizations to see if they serve our priorities and collective goals effectively. ….
Two sober public servants are proposing just that ….  new Multilateral Aid Review Act would create an executive branch task force to assess 38 organizations, as well as a parallel peer review body, made up of experts appointed by the Republican and Democratic leaders of both the House and Senate. …
…. pick a few touchstones on which to grade both state-based agencies …. and hybrids that integrate private and civil society partners …  suggest five.
First, organizations must serve our nation’s and citizens’ interests. …. give the United States a large voice and a veto against mischief.
Second, it is worth testing whether bodies meet their own mandate. …. are they creeping away from their original intent?
Third, does an agency serve the basic values of the United States and of humankind? …. advance peace, prosperity, and pluralism? ….
Fourth, institutions need to be accountable and transparent. …. organizational processes should be open to scrutiny to avoid waste and graft. …..
Last …. worth trying to judge organizations’ comparative nimbleness. Some organizations have a capacity to evolve effectively, like NATO after the Cold War welcoming former foes. ….  The reports of the Multilateral Organization Performance Assessment Network are as thorough as its name is difficult to say. Publish What You Fund offers exacting assessments of organizations’ relative transparency. …. other major Western governments assess multilateral agencies’ efficacy and alignment with their members’ global aims, just as the U.K. and Australia do. It would be fitting and responsible for the United States to do so too, and on a formal basis. …..
…. help the executive and legislative branches decide which agencies deserve taxpayers’ money most. …. indeed, a benefit of graded reports …. is that they demonstrably give those graded an incentive to improve.

Israel aiming to double its tech workforce in a decade

Goal is to boost sector’s employees from 270,000 to 500,000, and help startups stay in Israel and grow into full-fledged companies, Innovation Authority says in 2017 report

END_OF_DOCUMENT_TOKEN_TO_BE_REPLACED

US President says Iran deal an ‘embarrassment’ to the US, gives Iran an easy path to nuclear weapons.

‘Trump signaled that he’ll get out of the Iran deal’

Former US Ambassador to the UN John Bolton says US President Trump ‘is on the right path’ and the deal will eventually be canceled.

PolitiFact Sheet: 6 things to know about the Iran nuclear deal

Verification Process in Iran Deal Is Questioned by Some Experts

Iran Inspections in 24 Days? Not Even Close 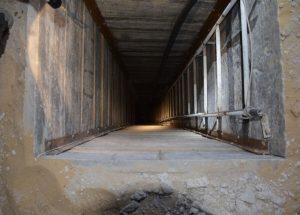 Hamas terror tunnel discovered by IDF in Gaza, photo by gSrikar via IDF Flickr
BESA Center Perspectives Paper No. 612, October 13, 2017
EXECUTIVE SUMMARY: Time may be running out for one of Hamas’s main weapons against Israel: its cross-border terror tunnels. As Hamas loses its potency against Israel in Gaza, it is turning its attention to fanning the flames of terrorism in the West Bank.
†Hamas†Gaza.. ...
Publicerat i Israel | Märkt Hamas, Israel, samlingsregering. | Lämna en kommentar

Al Jazeera admits it planted -reporter in US pro-Israel groups

News network says it will soon release documentary about pro-Israel activity in Washington ‘through the eyes of an undercover reporter.’
rerat Contact Editor
Nitsan Keidar, 10/10/17 11:20
The Qatar-based Al Jazeera media network admitted that it planted an undercover reporter in pro-Israel organizations in Washington, and that it plans to broadcast a documentary about his activity.
Earlier in 2017, the network had broadcast a series that caused a uproar – and even the dismissal of a diplomat at the Israeli embassy in London, after he was photographed talking about his ability to undermine the status of British lawmakers operating against Israel.
The network’s latest admission was made after a decision by the British regulator about complaints by Jewish organizations that the series created by Al Jazeera was tainted with anti-Semitism. The regulator ruled that the investigation was not anti-Semitic.
Following the decision, Al-Jazeera hastened to publish that “At the very same time [as the London investigation] – and we can safely reveal this now – we had an undercover operative working in tandem in Washington, DC. With this UK verdict and vindication past us, we can soon reveal how the Israel lobby in America works through the eyes of an undercover reporter,” according to The Intercept.
It should be noted that a number of Jewish organizations in Europe and the United States have pointed in recent months to possible “implants” that were trying to harm them. It was discovered in Britain, shortly before the broadcast of the Al Jazeera series, that an activist who joined pro-Israel activity in the United States was actually an extremist supporter of the Palestinian Arabs, and was identified as a participant in anti-Israel demonstrations in several European locations.
†Al Jazeera   †infiltration   ++. ...
Publicerat i Israel | Märkt Al Jazeera, infiltration | Lämna en kommentar
Laddar in kommentarer …