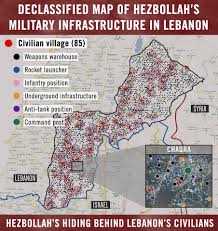 The IDF Tuesday, Sept. 5, embarked on its biggest military exercise against Hizballah in 19 years, with a radically revised mission in the face of a greatly empowered enemy (tanks and drones as well as 100,000 rockets and missiles) which is now embedded in Syria, not just in Lebanon.

Tens of thousands of ground, air, sea and intelligence units, including reservists – the IDF’s entire northern array – will simulate a Hizballah thrust across the border to occupy two Israeli locales in Galilee and the Golan. They will conduct simultaneous defensive and offensive operations deep behind enemy lines. The game plan is not to aim for a ceasefire and respite for the enemy to prepare for the next round, as the 2006 Lebanon war ended. This time, Israel strategists have set themselves the goal of defeating Hizballah convincingly enough to smash its morale and infrastructure and end its belief that it can destroy Israel the next time round
The exercise’s three military objectives are clearly laid out:
1.  Two sectors are defined for repelling a deep Hizballah thrust into northern Israel; (see map)
(a)  Hizballah is expected to go for the Metulla-Misgav sector on the Lebanese border, as well as the “Fatma Road” linking the Galilee hills north of Kiryat Shemona along the Israeli-Lebanese border.
(b)  Zarit-Shetula in western Galilee north of Nahariya, which is close enough to the Lebanese border for Hizballah troops to reach by land and through tunnels.
Israeli forces will practice driving the enemy out of occupied towns and villages, often using the element of surprise.
2. Another major IDF force will storm across the border into Lebanon for an effort to rapidly and decisively defeat Hizballah on its home ground. The defensive operation apart, the IDF is resolved to inflict on the enemy intolerable losses of life, infrastructure and territory.
This fighting-to-win strategy draws heavily on the negative lessons of the 2006 war, debkafile’s military sources report. Then, the IDF’s overreliance on air might for winning the war proved counterproductive. By the time ground troops were deployed to cross the border and challenge Hizballah, they were too few and too late.
3.  This time, the air force is practicing a different role in the conflict, in coordination with Israel’s heavily upgraded, multi-tier air defenses. They will not only be geared for contending with Hizballah’s vast 100,000 rockets and missiles, but also, for the first time, with a formidable fleet of assorted UAVs, which are designed to serve the enemy in multiple tasks: intelligence-gathering, delivering rockets and guided  drones packed with explosives.
Also for the first time, the IDF will prepare to order the evacuation of civilians, up to 75,000, from towns and village within close range of Hizballah fire. Their evacuation may take place by roads that are under enemy attack.