Israel aiming to double its tech workforce in a decade

Goal is to boost sector’s employees from 270,000 to 500,000, and help startups stay in Israel and grow into full-fledged companies, Innovation Authority says in 2017 report

The target was set as the authority on Monday released its 2017 annual report, in which it outlines the industry’s achievements, sets out its challenges and prepares a master plan of action.

The target was set as the authority on Monday released its 2017 annual report, in which it outlines the industry’s achievements, sets out its challenges and prepares a master plan of action.
Get The Start-Up Israel’s Daily Start-Up by email and never miss our top storiesFREE SIGN UP
“The main idea of this report is to figure out how to extend the number of people that currently enjoy the benefit of the high tech sector from 270,00 employees to 500,000 employees in 10 years,” said Aharon Aharon, the CEO of the authority, in one of his first interviews to the English-language press since he was appointed to the post in December 2016.
Israel’s high-tech industry is witnessing “unprecedented success,” the report said, but without “a dramatic increase in the number of high-tech employees, the “Israeli economy will reach a dead end,” the report said.
And standing still, in a world in which innovation changes swiftly and disruptively, could cost Israel the leading position it has achieved over the previous decades, the report warned. 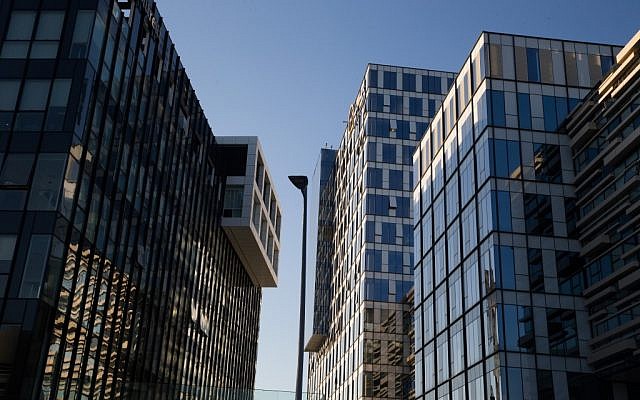 Illustrative view of high-tech office buildings in Herzliya Pituach, Israel, December 12, 2015. (Nati Shohat/Flash 90)
Israel boasts of being the first place in the world in research and development (R&D) investment and venture capital investments as a percentage of gross domestic product (GDP), and sees some 600 new startup companies being set up each year. There are 307 research and development centers of multinational companies such as Intel Corp., Google, IBM and Apple, operating in Israel and the so-called Startup Nation is ranked second in the world by the World Economic Forum’s innovation index.
These achievements, however do not seep into other sectors of the economy, and the tech sector has “largely remained insulated,” with the benefits affecting just a select few of the population, the report said.
Only 8.3 percent of employees work in the high-tech sector, a  figure that has remained stagnant for a decade. Wages of high-tech workers are more than double those of other employees in the economy: the average wage in the high-tech industry is NIS 21,000 compared to the average wage in the rest of the economy of some NIS 9,800. Traditional industries find it hard to compete with the low wages of East Asia, and if nothing is done, the “gap between the tech economy and the traditional economy will grow,” Aharon said, adding that an aim of the authority is to extend the benefits of the technology industry to the other sectors of the economy as well.
In addition, the tech sector is also witnessing an acute shortage of engineers and programmers that is hurting growth and causes a rise in wages:  between 2005 and 2015, the average wage in high-tech rose by 38 percent, the report said. 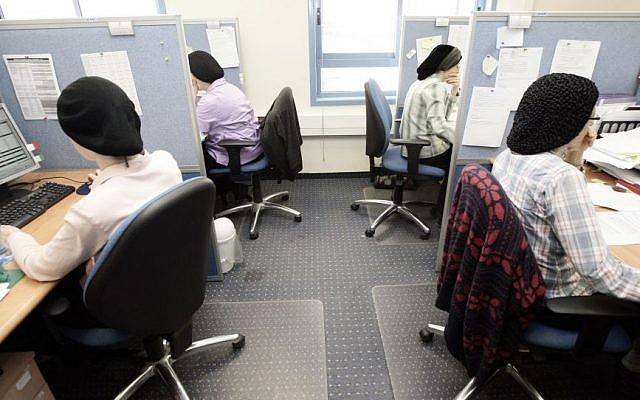 Ultra-Orthodox women on the job at a high-tech company in Modiin Illit (Abir Sultan/Flash90)
Israel’s innovation industry model is also largely based around technologies and startups that get bought up by larger corporations without ever becoming full-fledged firms. Under this scenario, the firms, and Israel, miss out on most of the value potential that can be generated by their technology.
Much of the R&D activity in Israel is the “basis for the creation of high technological value in Israel but the economic value is actually generated abroad,” Aharon Aharon said.
The report sets out a number of steps that should be taken to reach the targets set forth: 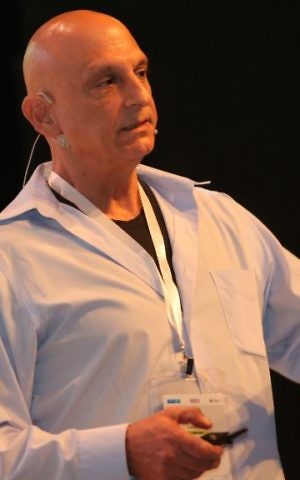 Aharon Aharon, CEO of Israel Innovation Authority speaking at conference in Tel Aviv (Courtesy: Ofer Vaknin)
In addition, the Innovation Authority aims to increase the number of workers in the high-tech sector by setting up extra-academic training programs – like coding programs — that will re-train high quality candidates to suit them for the ever-changing needs of the posts; and retaining older, 45-plus, skilled workers in the industry.
Most important, however, said Aharon in the interview, Israel needs to keep ahead of  competition by staying alert at all times.
“When you are dealing with high-tech, the changes in the market are very rapid,” he said, and this creates demand for rapidly changing skills.
“You have always to keep in touch and to be paranoid,” he said. “Nothing that has been achieved is guaranteed for the future.” One must always keep “monitoring the market and (know) to change (course) immediately when changes are coming. The report we provide today is a good monitor.”

Leveraging the multinationals operating in Israel

There are some 307 research and development centers that have been set up by multinationals in Israel, many of them after these corporations acquired an Israeli startup. These centers account for about 50% of all R&D investment in Israel, and generate high technological value and knowledge through a spillover effect as employees move from one job post to another. Some 70% of the people these centers employ are in R&D, mainly programmers and engineers.
Israel should take steps to encourage these multinationals to expand their activities locally through tax incentives and policies, the report said. Their operations should be expanded beyond just the core of R&D to include the full value chain of a global corporation: setting up production operations, marketing, design and support systems. 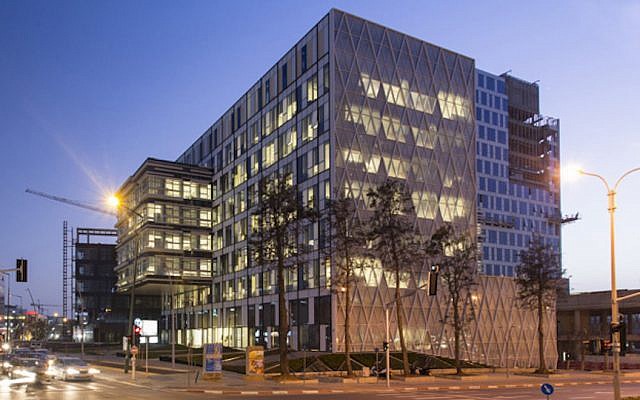 Apple’s new Herzliya R&D center (Courtesy)
The ideal would be for the R&D portion of these multinational companies to be about 25%, with 75% of the activities of multinational corporations in Israel focused on the other professions, Aharon explained.
And while these multinationals focus today on computerization, communications and software, they should be encouraged to expand the variety of their activities, to include also biotechnology and medicine, the report recommended.

Alongside R&D, a complete company includes manufacture of advanced components, global technological support, product engineering and manufacture, design, global operation, accountancy, finance, logistics and others. Helping startups expand their scope of activities will increase their influence on their economy from generating just technological value to economic value as well, expressed mainly by their ability to employ large numbers of highly paid workers in different professions.  The fostering of these workers is one of the Innovation Authority’s central strategic objectives, the report said.
Israeli startups lack the necessary funding to grow in Israel, the authority said, and it is currently working with local banks so they will provide guarantees to increase credit levels to startups, the report said.

Keeping the older workers up to speed

A workforce survey by the Innovation Authority found that senior employees, defined as those aged 45 and older, have difficulty maintaining their positions in the high-tech labor market. And in light of the skilled-worker shortage, it is important to be able to retain these workers, the report said.
The survey, of 1200 respondents in the high-tech sector, showed that there is a decline in the rate of employment as age rises. In addition, the overwhelming majority of these older workers, 85%, were dismissed, rather than leaving of their own choice. 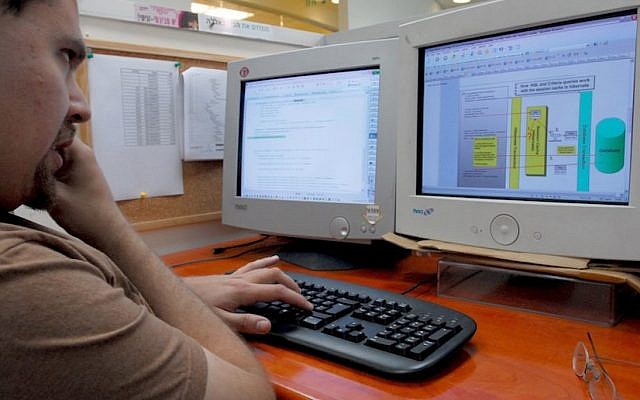 Illustrative photo of a software developer at an Israeli start-up working on a project. (Gili Yaari/Flash90)
That is because as technology moves very quickly, often the older workers are not trained enough to keep up with the pace. Others, who are seeking a managerial track, are often made redundant, because there is only a limited number of managerial positions to be filled, Aharon said.
“We suggest to take those people that still have technical knowledge and give them a course, similar to the boot camps we provide for the younger people, to provide refresher courses,” Aharon said.
Israel’s Ministry of Social Affairs recently set up a technology refresher course for older software engineers together with the Technion — Israel Institute of Technology and other partners, with the aim of updating their skills.
But more may be needed, said Aharon. “We are still studying the phenomenon, and we’d like to understand the ingredients and advise some kind of path,” Aharon said
†Teknologi+++†arbetskraft.. ...